Duty Roulette is a feature for the Duty Finder first introduced in the patch 2.1. Duty Roulette allows the player to participate in randomized duties. Since patch 2.1, various additional roulette modes have been added or changed to reflect the changing state of the game.

The Duty Roulette offers a daily reward that give the players a combination of experience, Grand Company Seals, Cracked Stellacluster, Cracked Planiclusters, and Gil, depending on the type of duty, your job depending on what is currently needed, and the level of job when entering the queue. The type and number of Tomestones available for each roulette often changes with new patch content.

Duty Roulette: Expert places the player into one of the light party dungeons that are at the current level cap. Dungeons are added and removed to this roulette as the game is updated. The dungeon(s) added in the most recent update will always be included, and there will always be at least two dungeons in total. This roulette will only become available after unlocking and completing all of the dungeons in the roulette.

Duty Roulette: Level 80 Dungeons will put the player into one of the dungeons at level 80.

Duty Roulette: Level 50/60/70 will put the player into a random level 50, level 60, or level 70 light party dungeon. As of patch 4.0, access to this Duty Roulette requires unlocking a minimum of 2 of the included dungeons. Players must also have an average item level of 45 or greater.

The following dungeons make up the Level 50/60/70 Duty Roulette:

As of patch 3.1, experience is now also awarded on the defeat of enemies and bosses and for completion of the duty if the player is not at level cap.

To unlock Duty Roulette: Leveling players must have completed both Sastasha and The Tam-Tara Deepcroft dungeons in the A Realm Reborn Main Scenario

The daily reward for Duty Roulette depends on your character's level at the time of signing up. Players not at level cap will receive experience points along with Company Seals and Gil. These players will also receive additional experience based on the difference between their actual level and the level of the dungeon or trial completed, with a further amount given based on the character's actual level.


As of patch 5.55, the following dungeons and trials make up this roulette:

Duty Roulette: Trials will put the player into a random trial that they have unlocked. It is unlocked on completion of two or more trials in the roulette.

As of patch 5.55, the following trials make up this roulette:

Duty Roulette: Main Scenario will place the player into one of the two full party dungeons from the finale of the main scenario quest: Castrum Meridianum and The Praetorium. Completing both dungeons is necessary to unlock this roulette. Characters must be level 50 and have an average item level of 42 to join. Cutscenes cannot be skipped in these dungeons.

Duty Roulette: Guildhests places the player into a random guildhest the player has unlocked. Players can begin to participate in this Duty Roulette at level 10 or higher. The Roulette unlocks automatically when you unlock at least two Guildhests.

Higher level guildhests are unlocked when players complete the previous set and are at least the same level as the next set, in increments of 5 levels until level 40.

Daily Challenge: Frontline places the player into one of the Frontline PvP maps. As there is only one Frontline map available each day, it is not truly a roulette, but grants daily rewards in a similar fashion. Players must be equipped with a Soul Crystal to enter this challenge.

Possible duties in this challenge:

Introduced in patch 3.2, Mentor Roulette allows mentors to join duties that are struggling to find members. Players can earn exclusive achievements from participating in this roulette.

As of Patch 5.55, players using this Roulette must be level 80 and have at least an average item level of 485.

Duty Roulette: Alliance Raids places the player into one of the 24-player raids that are no longer current. It is available once at least two such raids have been unlocked.

Added in 4.3 an 8-man raid will be selected at random from among those you have unlocked. 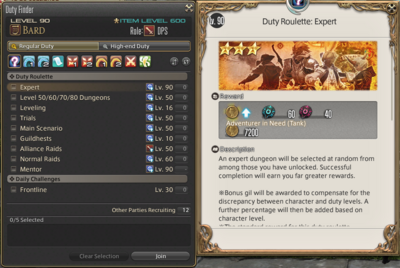 Duty Roulette in the Duty Finder

Do Not Sell My Personal Information
Retrieved from "https://ffxiv.consolegameswiki.com/mediawiki/index.php?title=Duty_Roulette&oldid=325856"
Category: