Under the influence of the lesser moon Dalamud, Nael van Darnus, legatus of the VIIth Legion, sought out and unearthed Allagan ruins in the eastern lowlands of Coerthas. Aided by the knowledge contained therein, he raised the very earth unto the heavens, and from this lofty perch did the White Raven nearly orchestrate the destruction of Eorzea.

The remnants of that mad plan still litter the frozen lowlands, as well as other ancient artifacts now laid bare. Though the powers that be are in agreement that Nael's data must be secured, they remain divided on the subject of how best to administer the region, which has prompted them to invoke the same laws which transformed Carteneau and Seal Rock into a battlefield. Where words fail, weapons speak.

The Fields of Glory (Shatter) is a level 30 pvp introduced in patch 3.3 with Heavensward. 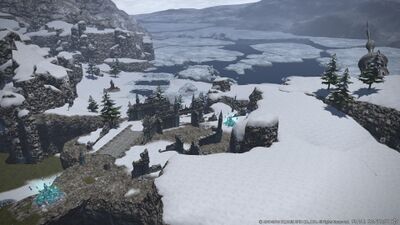 Similarly to Seal Rock, players must collect data from Allagan Tomeliths and obtain a set amount of data in order to be declared the winner, with the remaining alliances being ranked based on the amount of data they collected.

In the event that none of the three alliances manage to accumulate the requisite amount of data before time runs out, victory is awarded based on which alliance gathered the most data.

Players will find large structures known as Allagan Tomeliths all over the map. By standing within proximity of the Tomeliths, players will be able to extract the data within, increasing their data accumulation.

Tomeliths will be either "occupied" or "unoccupied", based on whether an alliance has claimed it. If a tomelith is occupied and opposing players attempt to access it, the tomelith will become "unoccupied" and the other teams will be able to attempt to claim it.

Active icebound tomeliths will be either large or small, with large tomeliths containing more data.

The data from icebound tomeliths can be collected by attacking them, and once they are destroyed, data will be rewarded to each alliance based on the amount of damage inflicted.