PvP, or Player-versus-Player, allows players to battle each other in various contests of skill and strength. Currently there are 2 PvP modes, Crystalline Conflict and Frontline. A third, Rival Wings, is on hiatus for balance updates in patch 6.2.

Crystalline Conflict is a 5v5 arena where players push a payload from the center to the opposing base, while Frontline is a large battlefield consisting of 3 opposing alliances battling under the banners of Grand Companies, and Rival Wings is a MOBA-inspired 24v24 mode. In PvP, players have special Actions and Traits and can obtain unique gear with the PvP currency,

Wolf Marks. Beginning in patch 6.1, Series Malmstones were added in addition as a reward system. New items can be purchased with the associated currency,

Official PvP Guide on the Lodestone

Players are able to see their PvP Profile while in the Wolves' Den Pier (or by opening the PvP profile menu) to see things such as their PvP Rank, their standardized job actions, as well as their ratio of wins and losses in Crystalline Conflict, Frontline and Rival Wings. Players can also set actions to their hotbars. Finally, players can also assign Quick Chat options to their hotbar for Crystalline Conflict. 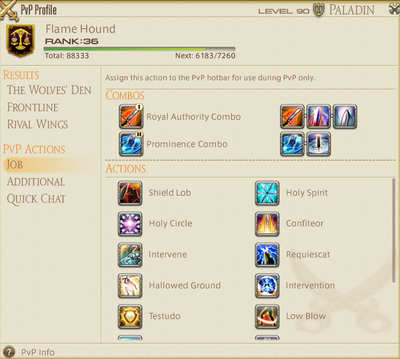 Wolves' Den Pier is the hub area where players can unlock the various PvP duties, as well as engage in Dueling, 1v1 battles. Players can also practice their Job's PvP Actions on the Training Dummys or exchange their Wolf Marks for gear, mounts and minions.

It's Time to Duel, Dueling allows 1v1 combat in the Dueling Circle at Wolves' Den Pier.

Crystalline Conflict PvP duties pit teams Astra and Umbra against one another in tactical confrontations. Each team may have up to five players, for a total of ten match participants. Teams are challenged to maintain control over a tactical crystal, which must be transported to a designated location amid the heat of battle.

Frontline is a large battleground featuring 3 opposing forces of the Grand Companies. Up to 72 players, 24 players on each team, will be able to battle for supremacy. It was first introduced in patch 2.3 with a single map: The Borderland Ruins (Secure).

Frontline is unlocked via

Like Civilized Men and Women from your respective Grand Company.

The naming scheme for Frontline is technically Map Name (Mode Name), though with retirement of the (Slaughter) mode on The Borderland Ruins there is functionally no distinction anymore. Map/Mode combos are commonly referred to by either separate part by the player base.

Rival Wings is 24 v 24 mode where players use Machina to destroy Magitek barriers and destroy the opposing party's crystal. It is conceptually similar to a MOBA. It was first introduced in patch 4.15 with a single map: Astragalos.

Rival Wings is unlocked via

A ranked competitive PvP mode featuring 4v4 battles between two light parties consisting of a Tank, a Healer, a Melee DPS and a Ranged DPS. Players can queue for The Feast either solo or in a PvP party.

Custom Matches allow 2 teams of 4v4 or 8v8 to freely battle each other in The Feast.

Spectator Mode allows players to spectate Custom Matches in parties up to 8 players.

The Wolves' Den / The Fold

The original light party versus mode was located at the Wolves' Den Pier, and was simply referred to as The Wolves' Den. This mode was introduced in patch 2.1, renamed The Fold in patch 3.21 with the addition of The Feast, and finally retired in Patch 4.0.