The Coils of Bahamut 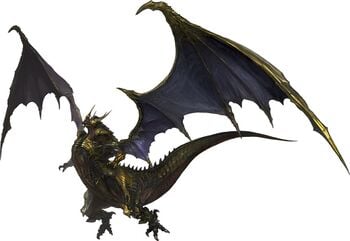 The Coils of Bahamut or just Coils is the level 50, 8-player raid of A Realm Reborn (2.0). It is the first raid series to be released in the game.

Because the Coils of Bahamut have a difficulty somewhere between (Extreme) and (Savage), these raids are not included in any roulette (even Mentor). As such, players solo queuing via Duty Finder will almost never be able to form a party.

That being the case, it is recommended that newer players use the Party Finder to seek the assistance of a couple of level-capped players for a "unsynced run" using the unrestricted party option, which will disable level sync and allow players to enter at their true level. This will allow players to see the story at an appropriate point in their Main Scenario Quest progression. Unlike future raid tiers, The Coils of Bahamut do not have a story mode, only a challenge mode.

Players who wish to complete these raids with level sync enabled should also form a pre-made party through Party Finder or other means, which further enables the use of Minimum Item Level and Silence Echo settings for an additional challenge. Note that due to significant job changes between when the raids were new and the present time, participation with Level Sync, Minimum Item Level and Silence Echo will still not fully reflect the original difficulty of the raids. There is very little tangible reward to completing the raids with level sync enabled, with the exception of certain Blue Mage achievements or obtaining very specific crafting materials from some bosses for certain Housing Items.

The Binding Coil of Bahamut

The Binding Coil of Bahamut is the first section of Coils released on August 27, 2013.

Afterwards players can talk to Urianger (x6,y4) in The Waking Sands to start the Bahamut Quests chain with a quest titled

Primal Awakening and unlock the raids.

The Binding Coil of Bahamut (Savage)

The Binding Coil of Bahamut has no (Savage) version. The main raids are already nearly (Savage) in difficulty.

The Second Coil of Bahamut

The Second Coil of Bahamut is the second part of Coils, released March 27, 2014.

The Second Coil of Bahamut (Savage)

The Final Coil of Bahamut

The Final Coil of Bahamut is the third and final part of Coils, released October 28, 2014.

The Final Coil of Bahamut (Savage)

The Final Coil of Bahamut has no (Savage) version. The main raids are already nearly (Savage) in difficulty.

Situated upon Vylbrand, Castrum Occidens is more akin to a research facility than a fortress. Even before its pillar was driven into the ground, Legatus Gaius van Baelsar had ordered his people to probe the fragment of Dalamud which fell at that precise location. The impact resulted in the creation of vast caverns pervaded by corrupted crystals. Though unknown dangers lie in wait within, you must brave them all if you are to learn the truth of the Calamity.

Having fully explored the depths beneath Castrum Occidens, Alisaie's findings have served only to raise more questions regarding the Calamity, and the disappearance of her grandfather, Louisoix. The discovery of a second entrance to the labyrinth has rekindled her desire for answers, and she would once again ask for your aid in braving its depths. Will she find the answers she seeks, or something darker still?

The resurrection of the elder primal Bahamut is nigh, and Alisaie has petitioned your aid for a final venture into the labyrinth to forestall a reckoning that would tear the realm asunder. When the truth behind the Calamity is revealed, will Alisaie at long last have the answer she desires?