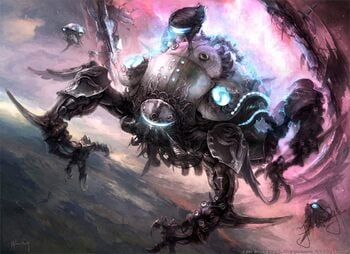 Omega: Deltascape is the first section of Omega released on July 4, 2017. It requires a minimum item level of 295.

Unlock: Completion of the level 70 quest chain starting with

The Hunt for Omega by talking to Wedge in Rhalgr's Reach (X:12.6 Y:12.4). Players first must complete Main Scenario Quest

Omega: Sigmascape is the second part of Omega, released January 29, 2018. It requires a minimum item level of 325.

Omega: Alphascape is the third and final part of Omega, released September 18, 2018. It requires a minimum item level of 355.

From the question of its origin to the very nature of its existence, much about Omega is shrouded in mystery. Employed by the Allagan Empire to capture Bahamut, it remained in an eras-long stasis until recently, when it was roused to contend with the threat of another primal. In the course of this mission, however, it vanished within the rocky expanse of Gyr Abania...

Omega is also a server in the European Chaos Data Center.