Everything You Know Is Wrong
Patch
5.3

Having put an unceremonious end to Komra's carnival with their incomprehensibly advanced weaponry, 2P's cohort of white-garbed androids retreats into the crater from whence they came. Though they are certain to have the tactical advantage should you pursue them into the installation, such a threat cannot go unchecked, and you and your newfound ally 2B are quick to give chase─Anogg and Konogg hot on your heels.

The Puppets' Bunker is a level 80 raid introduced in patch 5.3 with Shadowbringers.

It is the second part of YoRHa: Dark Apocalypse.

Note: It is possible to fall off the edge of the arena, resulting in instant death.

This loot is shared by the entire raid.

When originally released, you could receive only one reward item per week for completing duties in the Puppets' Bunker. This restriction was removed in Patch 5.4

Upon completing the Copied Factory, players can also earn a separate reward: a Puppet's Coin. The Puppet's Coin can be exchanged with Fathard in Eulmore (X:10.2 Y:11.7) for items used to enhance equipment purchased with Allagan Tomestones of Allegory or Revalation. 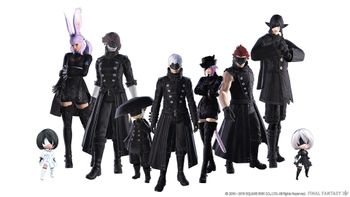 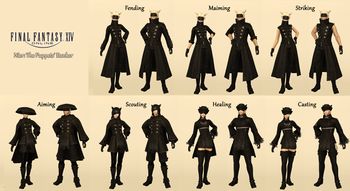 Do Not Sell My Personal Information
Retrieved from "https://ffxiv.consolegameswiki.com/mediawiki/index.php?title=The_Puppets%27_Bunker&oldid=304802"
Categories: