The Xaela of the Azim Steppe are renowned for their ferocity in battle, a traditional preoccupation that culminates once each Tsagaan Sar as they clash to earn the right to rule in the Naadam. Such infrequent conflict is insufficient to sate the Steppe's most zealous warriors, however, thus the Danshig Naadam─smaller contests to which the Grand Companies of Eorzea have now been welcomed. Join forces with the Maelstrom and the Orben people, the Adders and the Ejinn, or the Flames and the Horo in this grand demonstration of martial prowess, and may the mightiest prevail!

Onsal Hakair (Danshig Naadam) is a level 30 pvp introduced in patch 5.15 with Shadowbringers. 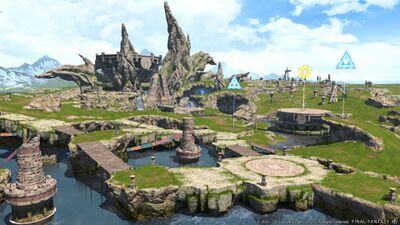 In the Danshig Naadam, the alliance that reaches the specified Tactical Rating is declared the winner. Alliances can increase their tactical rating via two different methods:

In the event that none of the alliances reach the specified tactical rating within the time limit, a victor is determined based on which alliance has the highest tactical rating.

All around the battlefield, players can find sacred sites known as "ovoos". Claiming these is key to increasing an alliance's tactical rating.

During the course of the battle, ovoos will become active, and can appear in one of four states:

Once an ovoo has been claimed, it will increase the tactical rating of the alliance that claimed it. This ovoo can not be taken by an opposing alliance. Eventually the ovoo will return to its inactive state.

When an ovoo is activating, it will be assigned a rank: either A, B or S. S rank ovoos appear less frequently, however they greatly increase an alliance's tactical rating. The closer to the center of the battlefield the ovoo is, the more likely it will be a higher rank.

As the battle progresses, the number of ovoos that can be active simultaneously will decrease, however, the likelihood that the ovoo will be a higher rank vastly increases.