The Royal City of Rabanastre

The Royal City of Rabanastre

Recently, residents of Kugane woke to find hovering above their city an airship unlike any ever seen. Yet while of Garlean design, the vessel distinctly lacked the bleak outfitting common in the Empire's warmachina. No, this was the Prima Vista, private stage for the Majestic Imperial Theater Company─a troupe having won acclaim across Garlemald for their timeless work, The Zodiac Brave Story. Which begets the question...why are they here? The answer to that question and more lies in the selfsame legend of which they sing. The legend of Ivalice.

The Royal City of Rabanastre is a level 70 raid introduced in patch 4.1 with Stormblood.

This boss has a number of distinct phases. Once you've memorized the pattern, you'll always know what happens next. Before pulling, mark the arena with gather points for each alliance. One goes due north, one south-west and one south-east.

All phases: When adds are up, they need to be killed. No exceptions. He starts the fight with several Ice Azers already spawned; they need to be taken out or they'll detonate and leave ice puddles that will hurt you later.

He repeats the phases in order from this point until killed or wipe.

Before pull, place gather markers for each alliance: one south, one northwest, one northeast. Stick with your alliance! This fight is far less forgiving than the previous one.

At this point, his abilities become semi-random. He usually uses Extreme Edge after Control Tower, so be ready for that. If you don't kill him before the second set of golems appear, you'll probably wipe.

At around 75% HP Rofocale will give a little speech:


I walk the shadows. You will not see me until my lance has transfixed your very soul.

He then will retreat and 5 copies of him will charge the area. Watch where those copies spawn. Safe spots will be at the right side of the first and left of the last copy.
At around 55% - 60% HP Rofocale will do the same move again.
That move is probably rather time-based. But he will likely do it two times in phase 1.

After the second split (around 55% HP), three Archaeodemons will spawn. The spawn points are at the triangle points around Rofocale's spawn point. That is, 1 behind the spawn and 2 and 3 left/right of the point of entrance, around the two circular floor patterns.

Aetherial Acceleration will be accumulated as long as the three adds are alive.

Each group must kill one of the Archaeodemons. The area around it will be shielded, so the other groups can't help. Think The World of Darkness - Cloud of Darkness: the 3 cloud adds.

Rofocale will circle the area. Getting hit by him will inflict damage and a knockback.

This phase will end if:

1. All three Archaeodem1ons are dead; or
2. Aetherial Acceleration has reached 100.

At the end of phase 2, Rofocale will continue to circle the area and slowly ride up into the air. At the highest point he will execute Heavenly Subjugation and inflict damage according to the Aetherial Acceleration meter.
One can avoid most of the damage by running to the sides of the area.
At 100 Aetherial Acceleration, this will be a wipe. Not only will the damage be higher, the charge will also cover a wider area.

Trample will now be followed by Cry of Victory.


Copies of Rofocale will charge the middle of the area. Safe spots are left/right.


Dark Geas will be followed by 5 copies of Rofocale charging the area. Safe spots are according to the spawn of the first/last copy.

The fight could be separated into 3 main phases:


I am the truth from which you run!

Emptiness: Watch the Emptiness meter - if the Shards of Emptiness are not destroyed in time, this will reach 100 and you will wipe.

Do not touch the outer edge of the area, if it is glowing bluish. It would apply aTransfiguration debuff that will kill the player.

In phase 3, the second Gnawing Dread will be followed by Argath retreating and making the area a death zone. There will be a small circular safe area. Mind that you can only run into the direction of the arrow.
Argath will then jump back and use Soulfix.

After about 3s the command will be executed and the player will be judged. Be sure to do what is expected, or be punished.
Failure will result in damage and 1 stack of the Unnerved debuff.

When originally released, players could receive only one reward item per week for completing duties in the Royal City of Rabanastre. Weekly limits were lifted in patch 4.2. 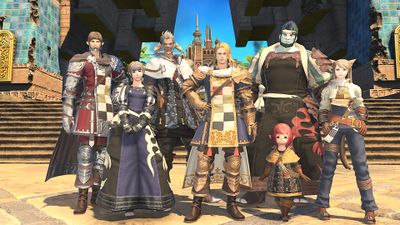 The story for this exciting new raid was written by guest creator Yasumi Matsuno, director and writer of titles such as FINAL FANTASY TACTICS and FINAL FANTASY XII. The boss designs are courtesy of guest creator Keita Amemiya, creator and director of the GARO series. Prepare for a new chapter in this grand adventure!

Do Not Sell My Personal Information
Retrieved from "https://ffxiv.consolegameswiki.com/mediawiki/index.php?title=The_Royal_City_of_Rabanastre&oldid=325791"
Categories: