This article is about the optional level 60 dungeon. For the Main Scenario dungeon, see The Great Gubal Library.

Though long-since abandoned by its Sharlayan keepers, the Great Gubal Library does not want for visitants, its halls ever stirring with the voidsent guardians who walk its corridors. With danger at every turn, the fool who dares trespass here would find not wisdom but certain doom. Yet it was not long ago that an intrepid adventurer braved the deepest depths of this forbidding vault of knowledge, returning unscathed and wiser for the experience─a feat of daring that would be sung of the realm over. Mayhap that is why an anonymous individual would beseech that selfsame champion to return in search of long-forgotten knowledge. One can only hope this venture proves yet another enlightening lesson.

The Great Gubal Library (Hard) is a level 60 dungeon introduced in patch 3.4 with Heavensward.

Demon of the Tome

Best to tank it sideways so that all the AoE indicators are visible. Otherwise, the fight is mainly a positioning check. Watch out for narrow AoE markers at the edge of the arena; a large AoE attack will follow in between them.

Strix is an owl-like demon and is the final boss of The Great Gubal Library (Hard).

It possesses four different attacks, three of which can be avoided through proper preparation. Healers will need to be careful, as they will have to jump between the boss and their party members to properly avoid damage while keeping the party healthy.

At about 50%, Strix will summon a Behemoth Ward into the center of the room. This is a non-targetable mob that will rain down comets on the party. Eventually, rocks will be placed on the ground as the Behemoth begins to bring down its meteor, with warnings indicating ten seconds left, and five through one seconds left. Players must have the rocks between them and the behemoth or they will take enormous damage.

Demon of the Tome 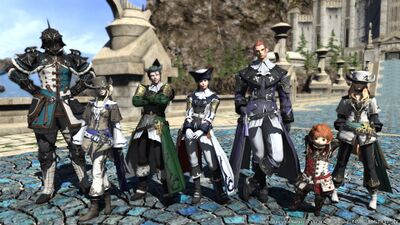