To the chagrin of countless treasure hunters, the golden coffer of the legendary Mistbeard was not to be found on Hullbreaker Isle. And so like the mists which had withdrawn to reveal the isle did those ambitious souls depart to seek fame and fortune elsewhere, allowing Eynzhar Slafyrsyn to quietly petition Admiral Merlwyb for permission to repurpose it as a training ground for Maelstrom recruits.

The storm marshal would have you be the first to brave this gauntlet, that you might pit yourself against the isle's fearsome fauna and the Maelstrom's elite, and in so doing rouse their spirits. Will you give the storm officers a beating they will not soon forget, or will they stand triumphant at the last and shout that they have bested the Warrior of Light?

Hullbreaker Isle (Hard) is a level 60 dungeon introduced in patch 3.3 with Heavensward.

This fight is very straightforward and is presented as several waves of fights. Primarily you'll need to dodge the AOEs, which include lines from the mobs and circles from offshore cannons. However, starting in the second wave and continuing into further waves, a coeurl will spawn tethered to the healer. This needs to be killed quickly as it applies a healing down debuff to the healer and a damage up buff to itself.

In this fight you'll be dealing with a snail. This boss has a few major mechanics.

This boss has two forms. In the first form, simply tank him away from the rest of the party, dodge the AOEs, and heal through his arena wide damage. His second form is more complex and again has a few possible mechanics. 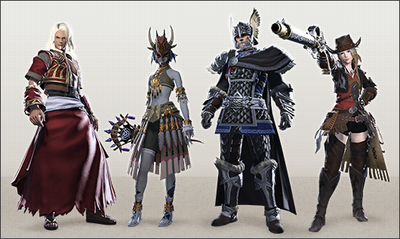