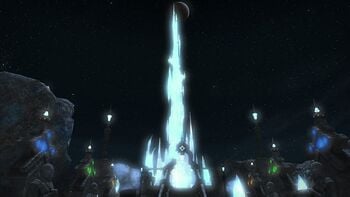 The Crystal Tower in Mor Dhona

Crystal Tower is the level 50 24-player Alliance Raid series. The first instance, The Labyrinth of the Ancients, requires 3 full parties of 8 players with average iLvl (item level) of 55 or higher. To unlock the raid, players are required to start the questline by talking to the Outlandish Man at Mor Dhona (X:21.8 Y:8.1).
As of Patch 5.3, this raid series is required for the MSQ to progress past Patch 2.55 quest

A Time to Every Purpose.

Ancient scriptures speak of a resplendent tower forged of crystal. Reaching to the heavens, this massive monolith is said to have been erected by the Allagans at the height of their prosperity. Long thought to be a legend from eras past, the fabled Crystal Tower has been freed from Hydaelyn's embrace, unearthed in the wake of the Calamity.

The Allagans' surpassing command of magic and technology fostered a civilization unlike any that preceded or followed. What then, could be the purpose of this crystalline construct, and what forgotten relics now stir within its walls? Those who would unravel these mysteries must first win their way through the Labyrinth of the Ancients, the perilous maze that leads to the entrance of the tower proper.

Having bested the defenses of the Labyrinth of the Ancients, the fellowship of NOAH now stands before Syrcus Tower, the principal spire of Crystal Tower.

What dangers await inside its glittering crystalline walls?

In the twilight of his reign, the first and last emperor of Allag, Xande, desired power above all else. He turned to the terrible being known as the Cloud of Darkness, a ruler of the void, and asked of her strength to make the world kneel before his throne with a covenant of blood.

When Xande was slain, his ambitions were laid to rest alongside him. Yet the Cloud of Darkness still seeks to enter the material realm, and will soon find passage through the Voidgate set to manifest within Syrcus Tower. With the fiend's coming, can the fellowship of NOAH brave the void and rescue the three souls able to stem the Cloud's flood of shadows, or will the expedition itself vanish beyond the rift in the World of Darkness?

The first part of the Crystal Tower was released with Patch 2.1 on December 17th, 2013. This included the very first 24-man alliance raid, The Labyrinth of the Ancients. The second part followed with Patch 2.3 on July 8th, 2014 and included the second 24-man alliance raid, Syrcus Tower. The third and final part was released on January 20, 2015 as part of Patch 2.5 and contains the finale to the series, The World of Darkness. A weekly repeatable quest for running the series was also added in 2.5:

The Gift of the Archmagus.