For All the Nights to Come
Entrance
Coerthas Western Highlands (X:20, Y:7)
Patch
3.0

In the days following the Calamity, western Coerthas was abandoned by the knights of Ishgard, save for the Dusk Vigil, whose defenders refused to withdraw. Since then, the fortress has only fallen further into disrepair, and her garrison has long since been presumed dead. Unlike most Ishgardians, who would sooner put the tragic episode behind them, Father Wealdtheow would have you enter the forsaken fortress and reclaim a priceless treasure: an ice rondel set in the crown of a sculpture within the vigil's chapel. A simple request, perhaps, but if experience has taught you anything, such tasks are anything but...

The Dusk Vigil is a level 51 dungeon introduced in patch 3.0 with Heavensward.

For All the Nights to Come. Players can start the quest by talking to Wealdtheow in Coerthas Western Highlands (x16, y22). To unlock the quest, players need to complete the level 51 Main Scenario Quest

Sounding Out the Amphitheatre.

Any of the Towering Oliphant's loot, or one of the following:

Any of the Ser Yuhelmeric's loot, or one of the following:

Torn Journal Page: To whoever reads this─if there is anyone left to read it─let it be known that I, Ser Pascaleret Neurtaille, bore witness to Dalamud's fall. The lesser moon's descent, the black doom which emerged from within, the flames which spread across the horizon, turning night to day─it shall haunt me for the rest of my days. It is the dawn of the “Seventh Umbral Era,” according to some of the men. I told them to put no stock in the ravings of the prophetess, but even I do not know what to believe anymore.

Torn Journal Page: The engineers are still surveying the damage, but anyone with eyes can tell that the Dusk Vigil is beyond repair. Some walls are hardly fit to be called as such, piles of crumbling masonry as they are.

The officers have been pleading with Ser Yuhelmeric, asking him to order a withdrawal. He knows our position is untenable, yet he refuses. “We will hold it to the last, for we are the shields on the wall─the defenders of the Holy See,” he says. He is a brave, pious man. Less so, we who serve under him.

Torn Journal Page: The men we rescued from the collapsed wing have not fared well. Given our dwindling supplies and this seemingly endless blizzard, we may be forced to make difficult decisions soon.

This unseasonable weather grows worse with every passing day, and the toll it has taken on morale is plain. We have yet to receive reinforcements from the Holy See, and I fear none shall come. Nevertheless, Ser Yuhelmeric remains steadfast in his decision and will suffer no talk of withdrawal. Ser Yuhelmeric's steward tells me he passes hours in the chapel, praying to the Fury for guidance... But I chanced to see him once, as he knelt before the statue. His eyes were transfixed upon the jewel in its helm, and he was whispering things I dare not write.

Torn Journal Page: Ser Yuhelmeric has taken me into his confidence. He says I am an honest man. I wish I were a braver one.

The mutiny has been quelled. Among the starving, half-mad knights were Ser Yuhelmeric's most trusted officers. He wielded the axe himself.

Ser Yuhelmeric received me in the chapel afterwards. I told him we will not last a fortnight without food. He smiled and told me that the Fury has blessed us with a bounty of fresh meat, then returned to his prayers. I joined him.

Torn Journal Page: O Halone, pray forgive Your humble servant. For too long have I let fear rule my heart, and in my cowardice have I been party to unspeakable acts.

I know now I shall never see my children again─nor would I want them to look upon their father's face...and what it has become.

I am outside Her grace. 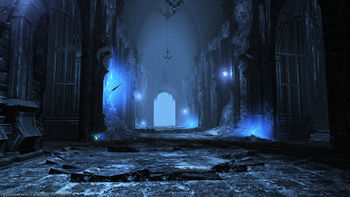 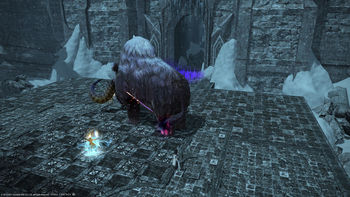 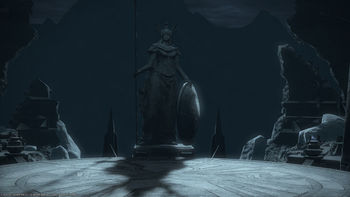 Do Not Sell My Personal Information
Retrieved from "https://ffxiv.consolegameswiki.com/mediawiki/index.php?title=The_Dusk_Vigil&oldid=301389"
Categories: