The Last Pillar to Fall
Patch
3.5

Only one pillar of the Warring Triad remains: Zurvan, the Demon. Worshipped by a Meracydian race of centaur-like beings, this eikon manifested upon the physical plane as an embodiment of eternal victory. And yet, despite his godlike might, Zurvan was captured. He has languished in his Allagan-made prison now for five thousand years, his primal desire for justice swelling in magnitude with each passing millennium...

Containment Bay Z1T9 is a level 60 trial introduced in patch 3.5.

Zurvan utilizes the following moves and mechanics throughout a total of four phases.

The fight begins on a large platform divided into noticeable quarters which, as the fight progresses, eventually fall in a counterclockwise pattern starting from the east. Anyone standing on falling segments of the platform will immediately perish. When the last remaining quarter of the platform drops, Phase 2 begins.

Phase 2 begins after the last remaining section of the platform drops down, causing all remaining players to fall into a new arena.

Phase 3 consists of dealing with multiple waves of adds.

This phase begins after all adds are slain. For the most part, it is identical to Phase 2, except for a few additional abilities. 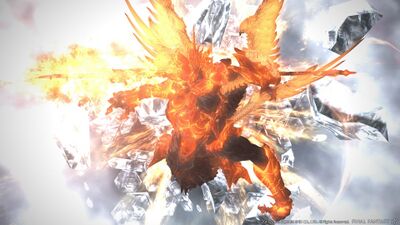 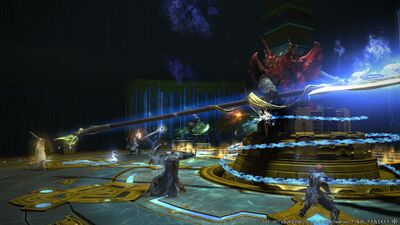 Do Not Sell My Personal Information
Retrieved from "https://ffxiv.consolegameswiki.com/mediawiki/index.php?title=Containment_Bay_Z1T9&oldid=288358"
Category: