Long have the sweeping plains of Paglth'an been home to the nomadic Amalj'aa. Though the herding of livestock keeps them constantly on the move, the permanent settlement of Zolm'ak forms the seat of power and center of their society. It is there the Telophoroi would wreak destruction, dispatching a vast host comprised of both imperial soldiers and tempered dragons, with Lunar Bahamut at its head. Yet even against these heretofore unimagined foes the Amalj'aa stand strong, with Estinien, the recently freed Tiamat, and the Eorzean Alliance at their side and eager to turn the tide.

Paglth'an is a level 80 dungeon introduced in patch 5.5 with Shadowbringers. 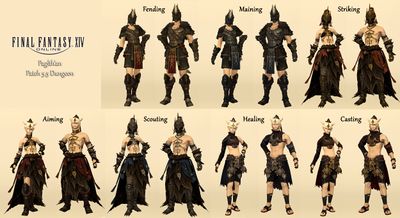 Do Not Sell My Personal Information
Retrieved from "https://ffxiv.consolegameswiki.com/mediawiki/index.php?title=Paglth%27an&oldid=297895"
Categories: