The City of Lost Angels
Patch
4.5

Beckoned by the auracite, you arrive at the Orbonne Monastery─vestige of an ancient civilization lost beneath the twisted roots and vines of a forbidden jungle. The Durai Papers claim this holy sanctuary to be where the tale of young Ramza Beoulve began. Tonight, it is where your tale ends.

The Orbonne Monastery is a level 70 raid introduced in patch 4.5 with Stormblood.

NOTE: Throughout the fight, two types of special AoEs will spawn, each giving a specific Duty Action. The golden Shieldbearer makes the user immune to damage from the front. Moving or using other abilities while Shieldbearer is active will end the effect. The silver Swordbearer grants a short 180 degree arc attack that deals high damage to shielded enemies.

Note: Auto-attacks will hit the highest hate member of each party.

Ultima will then re-summon all 3 for a three-round combo attack:

Upon completing The Orbonne Monastery, players will also earn 2 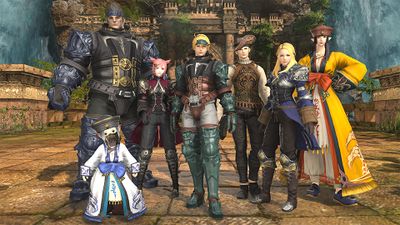 The story for this exciting new raid was written by guest creator Yasumi Matsuno, director and writer of titles such as FINAL FANTASY TACTICS and FINAL FANTASY XII. The boss designs are courtesy of guest creator Keita Amemiya, creator and director of the GARO series. Prepare yourself for the exciting grand finale of Return to Ivalice!

Do Not Sell My Personal Information
Retrieved from "https://ffxiv.consolegameswiki.com/mediawiki/index.php?title=The_Orbonne_Monastery&oldid=314586"
Categories: