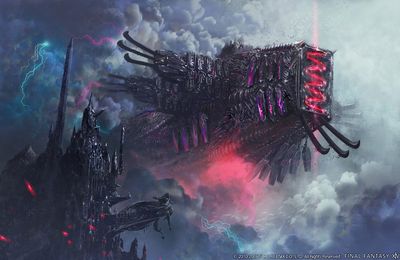 Shadow of Mhach is a 24-man raid series, much like the Crystal Tower series. The story follows a band of sky pirates as they discover the ruins of an ancient civilization that made a dark pact with an evil power in an effort to save themselves from destruction.

With advances in the usage of airships and amidst the arrival of the so-called “Great Sky Age,” there are those who ride their own airships through the skies seeking hidden lands and mystery. They are known as “sky pirates.”

There has been a rumor spreading amongst the sky pirates of a ghost ship wandering across the skies—an ark filled with evil power that was created long ago by mages to run from cataclysm.

Deep in the Yafaem Saltmoor lie the ruins of the fabled city of Mhach─a civilization of the Fifth Astral Era whose prosperity was built upon unparalleled magicks of destruction. It is to this ancient edifice, and its vaults of occult secrets, that you and the Redbills plan your next foray.

The ancient tome recovered by Captain Radlia of the Talons tells of a floating refuge─an island created by Mhachi sorcerers to provide safe haven from calamitous floodwaters. With the disaster that befell the Void Ark, however, the island's intended residents never arrived. Cait Sith is convinced that Diabolos has instead claimed this refuge as his own, transforming what was to be a bastion of hope into a voidsent nest of shadowy nightmare. And it is into this fiendish lair that you must delve.

The first part of Shadow of Mhach was released with Patch 3.1 on November 10th, 2015. This included the 24-man alliance raid, The Void Ark. The second part followed with Patch 3.3 on June 7th, 2016 and included the second 24-man alliance raid, The Weeping City of Mhach. The third and final part was released on January 17, 2017 as part of Patch 3.5 and contains the finale to the series, Dun Scaith. A weekly repeatable quest for running Dun Scaith was added in 3.55a on February 27, 2017: