The ancient tome recovered by Captain Radlia of the Talons tells of a floating refuge─an island created by Mhachi sorcerers to provide safe haven from calamitous floodwaters. With the disaster that befell the Void Ark, however, the island's intended residents never arrived. Cait Sith is convinced that Diabolos has instead claimed this refuge as his own, transforming what was to be a bastion of hope into a voidsent nest of shadowy nightmare. And it is into this fiendish lair that you must delve.
The Lady Radlia stands ready to bear you across the skies. Assault the island, reclaim the Nullstone, and cast your demonic foes into oblivion!

Dun Scaith is a level 60 raid introduced in patch 3.5 with Heavensward. It is the third part of Shadow of Mhach.

There are no walls on the left and right side of the ship so be careful not to fall off. Throughout the fight, the boss moves between these sides to attack you and make you fly off to your death.

The boss opens up with Void Death. This is a large red-black, circle area of effect (AoE) at the center that pulls you in a couple times. You must keep running away from it or anyone caught in it dies.

Next, it casts Void Aero II and marks three players with green spread markers. Go to a place away from everyone to place the tornado. Anyone walking into the tornado will get hurt by Biting Wind, which gives you small damage and the

Windburn debuff. Windburn can be removed with

When the boss casts Void Blizzard II, avoid the fan AoE by going to either side or on the safe spots in between. If you don’t, you receive a large amount of damage from Void Blizzard III and get the

Frostbite debuff. Frostbite can be removed with

Throughout the fight, the boss casts Doomsay which randomly gives

Doom to one to two players. Healers must use

Esuna to remove them or they will die when the countdown ends. 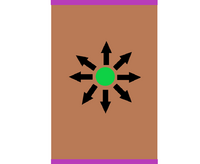 If the boss casts Void Aero III, immediately get close to either purple walls on the top and bottom of the ship. A green circular wind will appear in the center that causes proximity-based damage and knockback, so make sure you aren’t too close to it or you may die from damage. If you aren’t against a wall, you may fly off to your death.
NOTE: The wind makes you fly in a straight line from the center, so you must be perpendicular to the purple wall to fly into it. See the image on the left to see the direction of where the wind blows. 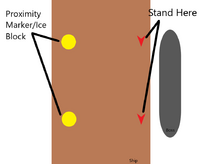 Where to stand for Blizzard IV

When Void Blizzard IV is cast, stand directly opposite of either proximity markers and take the damage. Ice blocks are dropped where the marker is located, and the boss immediately casts Void Aero IV. If you try to stand where you take the least amount of damage from the proximity marker, you might not have enough time to get to the ice block. If you stand where the opposite side of the ice block was located, you will fly to the block when Void Aero IV is cast, blocking you from falling off. Anyone who didn’t fly into the block will fall to their deaths.
NOTE: You can also use

Arm's Length to stop you from flying off, but make sure to time it right because you only have a five or six-second duration.

In the latter half, everything repeats with some differences.

The boss casts Doomsay more often, and only one proximity marker is placed on the floor when the boss casts Void Blizzard IV.

Bleed, which can be removed with

Esuna. If you can, go to the purple wall where the boss isn’t next to, to avoid Bolt of Darkness.

Make sure to kill the two Void Sprites that spawn randomly. Avoid their cone AoE when they cast Dark II.

Since the beginning of the fight, the boss places random gray squares on the ship’s floor. In this half, the boss finally uses Void Death IV, which makes the squares pulse. Anyone standing on them when the cast is done, dies.

Overview of Skills and Abilities

*Italicized words are names of casts that are shown in the cast bar.

Kill Deathgates when they spawn to avoid adds

When originally released, players could receive only one reward item per week for completing duties in Dun Scaith. Weekly limits were lifted in patch 3.57. 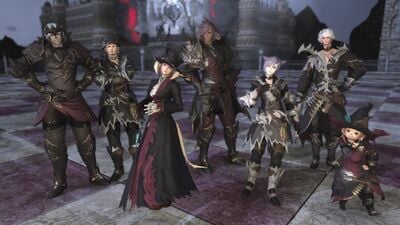