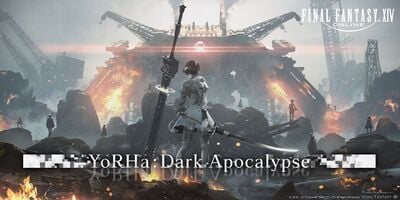 YoRHa: Dark Apocalypse is a storyline consisting of a series of three 24-man raids in Shadowbringers with NieR: Automata theme. It was designed by the creators of NieR: Automata: Yoko Taro and Yosuke Saito.

Machina indistinguishable from men in appearance, speech, demeanor─anyone in Norvrandt would dismiss such an idea as the fantastical ramblings of drunken dwarves. The discovery of a white-clad woman identifying herself as an "android," however, may call everything that has long been believed about technology into question...

The white-robed android 2P awakens at last, but so too does an unforeseen danger to Komra. As Anogg and Konogg's search for answers grows ever more desperate, the Warrior of Darkness may find greater questions yet await in the core of the Puppets' Bunker.

The white-garbed 2P's discovery was the first domino to fall in a series of conflicts that have only escalated since the arrival of the black-shrouded 2B, the pattern they form growing ever more complex. The time of revelation may be at hand, but is this tale one of hope...or despair?

Newfound ruins amidst the Duergar Mountains have drawn the attention of curious dwarves and the Warrior of Darkness alike. The discovery of a pale-garbed woman calling herself 2P, however, will force these intrepid explorers to confront the reality─and dangers─of technology beyond their wildest imaginings.

An android in white, awakened within the excavation tunnels near Komra. Her knowledge of the ruins and their machine lifeforms could be an invaluable asset...

Clever and curious twins who make their home─and a nuisance of themselves─in the village of Komra. They are determined that the Warrior of Darkness help bring their master plan to fruition...whatever that may be.

These peculiar machina, discovered in the ruins unearthed by Kholusia's dwarves, are so unlike anything else found in Norvrandt that their very existence seems beyond the realm of possibility. Whence have they come, and to what end?

Good morning! YOKO TARO here. Just last night, I had the strangest dream where I was working on a raid for FFXIV...and then I woke up, and told Square Enix about it, and they were like, "that...wasn't a dream," and─

Member of the Board and Executive Producer, SQUARE ENIX CO., LTD.

Greetings. I'm Yosuke Saito, a.k.a. Yosu-P! If 2B stands for YoRHa No.2 Type B, what does 2P stand for? It can't possibly be "2nd Player" this time... Well, I'm sure that if you play YoRHa: Dark Apocalypse, you'll find that mystery completely resolv─