Having found themselves in somewhat dire financial straits, the Scions of the Seventh Dawn are on the lookout for profitable ventures. Fortuitously, one appears to have presented itself: an anonymous missive from an individual seeking the aid of the warrior who laid low the Lord of the Revel. But before they will divulge the details, they would put your abilities to the proof. To wit, you are to venture into the hidden depths of Hells' Lid, a volcanic island once home to a host of oni─at least, according to ancient legend...

Hells' Lid is a level 70 dungeon introduced in patch 4.2 with Stormblood.

Suggestion: Stack somewhere near the edge and let the tank draw the adds to one spot. AoE them down but keep an eye open for the boss's charge. Group up in the middle after the proximity AoE is done. Prepare for Patient Blade. 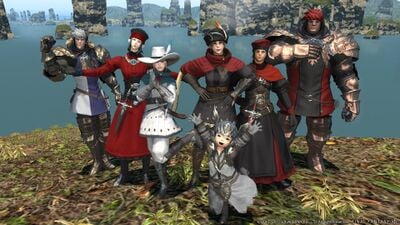