The Sunken Temple of Qarn

This article is about the Leveling dungeon. For the optional level 50 dungeon, see The Sunken Temple of Qarn (Hard).

The Sunken Temple of Qarn

Under the unforgiving Thanalan sun lie and ruins of an ancient temple half-devoured by the shifting sands of timeless desert. Through used by ancient Belah'dians as a place to worship the sun goddess, Azeyma, the massive underground structure appears to be far older than his Sixth Astral Era civilization. That, however, did not deter Belah'dian sultans from each adding their own chambers to the original construct to a bid to achieve immortality through creation. In the subsequent years since the fall of Belah'dia, many an adventurer has sought to explore the temple's mysteries and perhaps return with the treasure of a lost era... Only to fall victim to one of the complex traps set to prevent that very thing from happening.

The Sunken Temple of Qarn is a level 35 dungeon introduced in patch 2.0.

Optimal pathing for the dungeon is as follows (this skips optional side rooms and requires only opening the minimum number of doors needed to progress to the end): 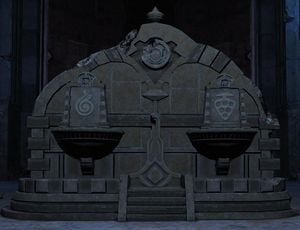 On the Scales of Judgment, the puzzle at the end of the dungeon, players should place:

As the loot from the extra chests is usually of little value, many parties will skip collecting the items and will ignore the scales puzzle and earlier side rooms.

Visiting all side rooms is required for the

Mapping the Realm: Sunken Temple of Qarn achievement. Players who wish to obtain this achievement should either communicate with the party that they would like to open all side rooms, or run the dungeon solo with Unrestricted Party (unsyncing) settings when they are of sufficiently high level.

The Sunken Temple of Qarn Guide

Teratotaur is the first boss of The Sunken Temple of Qarn. The boss fight has multiple instant death mechanics, involving adds and three square plates positioned around the arena.

Instant Death Mechanics
Occasionally he summons a pair of Dung Wespes. The Wespes are like the Temple Bees found throughout the area or Palace Hornets from the Palace of the Dead, and will cast

Final Sting if they are not defeated quickly. Final Sting deals damage equal to ninety percent of the target's maximum health (e.g. 100 Max HP = 90 damage). Whilst this is survivable from full health, the Teratotaur may finish off a wounded Tank quite easily - or the Wespes may both target the same character and deal extreme damage to them. Either defeat the wespes before they cast Final Sting or cancel the ability with stuns and interrupts.
When Teratotaur is under 50% HP, he will periodically "begin to growl", and then use Mortal Ray. This room-wide AoE ability places the

Doom debuff on your entire party; the debuff lasts 12 seconds and will instantly kill anyone still afflicted by it when the timer ends. Players can remove this debuff by stepping on the square plate that is glowing orange; only one of them will turn orange at a time. It may be preferable to tank the Teratotaur in the middle of the room between all three plates so that they are within easy reach of the Tank and Melee DPS, but the duration is long enough that it should not be a problem.

Other Abilities
Frightful Roar is a circular AoE ability that causes Physical Vulnerability Up on all of the targets hit.
Mow is a frontal cone AoE attack that inflicts poison on targets hit.
Triclip is an instant attack that does heavy damage to its primary target.

Adjudicator is the final boss of The Sunken Temple of Qarn. Throughout the fight, he will spawn various Mythril Verges on the ground.

When the Mythril Verge spawns, it will start firing beams of laser across the room. When a pale, blue beam appears across the ground, move out of its way immediately. The beam will light up after about 1 second and heavily damage anyone in its path. Because of the high damage and low health nature of the Mythril Verge, damage dealers should destroy them as soon as they spawn.

After the Adjudicator has taken some damage, he will spawn Verge in a large dark box on the ground. After a few seconds the black box will seal off and the Verge will begin to cast Verge Pulse. Verge Pulse explodes the Verge and does a decent amount of damage to your entire party. While the black box is visible, players who are not in it will do reduced damage. Damage Dealers should enter the black box as soon as it spawns and destroy the verge.

After taking a significant amount of damage, the Adjudicator will spawn 2 black boxes in the 2 corners of the room. The two damage dealers should split up and enter the two boxes and destroy the verges before they can cast Verge Pulse.
When near death, Adjudicator will summon 4 laser-shooting Mythril Verge at a time. Players should dodge the lasers while taking out as many Verges as they can. DPSing down the boss is also an option.

In the beginning of the fight, the Adjudicator will spawn cube-shaped mobs named Sun Jurors. When fighting these creatures, players need to ensure that the mobs die on the square platforms on the ground. If you do not kill them on the platforms, they will continuously revive. No more Sun Jurors will spawn once the Mythril Verges start spawning.

Darkness is a frontal AoE cone attack that will damage and blind the players struck.
Paralyze is a spell he will periodically begin casting that inflicts

Paralysis on one of your party members. This can be Interrupted with either

Leg Sweep. Healers should use

Esuna on an afflicted player to remove the debuff.
Creeping Darkness is an instant ability that deals a moderate amount of damage to all party members.

Dropped by the first Qarn Facer you come across.