The Weeping City of Mhach

The Weeping City of Mhach

Deep in the Yafaem Saltmoor lie the ruins of the fabled city of Mhach─a civilization of the Fifth Astral Era whose prosperity was built upon unparalleled magicks of destruction. It is to this ancient edifice, and its vaults of occult secrets, that you and the Redbills plan your next foray.
You expect to encounter voidsent─the same terrible beings that grounded Radlia and her crew─but on your path to retrieve a relic of incalculable power, can you prevail over the unfettered miseries of the Weeping City itself?

The Weeping City of Mhach is a level 60 raid introduced in patch 3.3 with Heavensward.

Haircut is always where her hair's blade is visually represented on her model (bleed can be cleansed. Strong bleed). The boss' main attacks cause a cleave on the side of her blade. Move far away from extension telegraphs as they pull you in even when you're not standing on them. If the adds spawning from extension are not killed in time, the person trapped inside will die, and it will suck another person in and repeat. Focus these ASAP.

There will be a phase where she summons multiple Bijous and Small Bijous. Focus the Small Bijous down first as they finish their Energize cast sooner, and then burn the Bijous. Every Energize cast powers up her next raidwide AoE and will wipe if she has too much damage.

When the axe and bulb flowers spawn, look for the axe flower and stay near them to avoid their donut AoE. The bulbs will cause for a damage and knockup under and around them. Depth Charge will make the boss charge towards the wall, usually follows with Haircut. Make sure to watch where her blade is and dodge Depth charge on her safe side. Reposition the boss afterwards.

Penetration will pull you towards the center if you're looking at the boss, and will push you away if you're not. Bulb flowers will spawn and you will be pushed into them if you don't stand on an open spot. Try to position yourself to be pushed towards the empty spots of the arena to avoid these. When 2 blade flowers spawn just move away from the center. Red markers on players is just like the Cloud of Darkness marker, periodically raining damaging blasts down upon the player's location, so just run away from everybody and keep running to dodge these.

Try to keep the boss around the middle of the arena, as it will often pick a side and do a huge AOE (the whole half of the area she is facing) that usually kill anyone caught in it. Don't tank her on the edge, as you might have just a tiny safe spot and will most likely result in a wipe.

When she stops and looks toward a direction get away from her front side and move to the middle, as after dealing damage straight ahead of her she'll do one of her deadly AOE.

When originally released, players could receive only one reward item per week for completing duties in The Weeping City of Mhach. Weekly limits were lifted in patch 3.4. 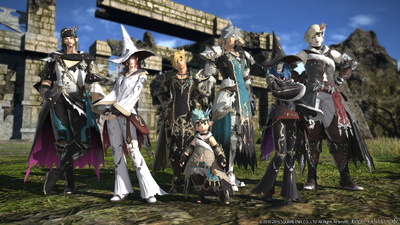 Deep in the Yafaem Saltmoor lie the ruins of the fabled city of Mhach─a civilization of the Fifth Astral Era whose prosperity was built upon unparalleled magicks of destruction. It is to this ancient edifice, and its vaults of occult secrets, that you and the Redbills plan your next foray.

Do Not Sell My Personal Information
Retrieved from "https://ffxiv.consolegameswiki.com/mediawiki/index.php?title=The_Weeping_City_of_Mhach&oldid=314592"
Categories: