The Tower at Paradigm's Breach

The Tower at Paradigm's Breach 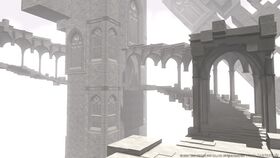 The white-garbed 2P's discovery was the first domino to fall in a series of conflicts that have only escalated since the arrival of the black-shrouded 2B, the pattern they form growing ever more complex. The time of revelation may be at hand, but is this tale one of hope...or despair?

The Tower at Paradigm's Breach is a level 80 raid introduced in patch 5.5 with Shadowbringers.

It is the third part of YoRHa: Dark Apocalypse.

Brave New World. Start the quest by speaking to Dig Site Chief in The Puppets' Bunker (X:9.8 Y:14.3). Players must first complete the quest Chronicles of a New Era quest

This fight introduces mechanics one at a time and then quickly begins to combine them. Keep an eye on the boss' cast bars and for its physical tells to avoid taking unnecessary damage.

After one of the bosses is defeated, the other will lose its Upgrade buff if it had one, interrupt any ability it was casting, and will begin repeatedly using Lamentation until it is defeated.

Part 2
Note: This phase will open with Cruelty, so healers make sure your alliance has sufficient health if you were unable to do so before going into Intermission Phase.

This is probably the single most complicated fight in the raid and harshest to newcomers. Everyone dies here. A lot. Especially with how many instant kill attacks there are. Take your time to learn the mechanics and be patient with both yourself and others.

Note: The boss will cast Rhythm Rings before the trains arrive, blocking your view of what is to come, so be ready to check and move out of the way.

The mechanics then repeat until the boss is dead.

When originally released, players could receive only one reward item per week for completing duties in The Tower at Paradigm's Breach. As of patch 5.58, all weekly loot restrictions have been removed.