On the Threshold
Patch
5.1

Anogg and Konogg's explosive efforts have at last opened a path from Komra's excavation tunnels into an expanse of enigmatic ruins─but if the equally enigmatic 2P is to be believed, it will not be the inert and rusting relics of a long-dead civilization that await within, but life unlike any this world has ever seen...

The Copied Factory is a level 80 raid introduced in patch 5.1 with Shadowbringers.

It is the first part of YoRHa: Dark Apocalypse.

In this fight, each platform has completely different mechanics based on which one they are on, as well as the position of the rotating machine arm above the raid floor.

Attacks by the Machine

After casting Surface Missile, Engels will follow with another Precision Guided Missile and a Diffuse Laser before summoning adds.

Engels will begin charging, become untargetable, and spawn three Reverse-jointed Goliaths and a half-dozen Small Bipeds. The bipeds can be safely ignored as 2P will destroy them with a blast of missiles. Each alliance should tank and fight one Goliath each, away from the other two. If all adds are not destroyed before Engels's Charge meter hits 100, the raid will wipe.

After the adds are killed Engels will use a powerful raidwide Diffuse Laser; after this he will destroy the platform entirely from underneath. Players should get away from the center of the platform to avoid taking fatal damage. Players will land on a conveniently-placed second platform and Phase Two will begin.

After Area Bombardment Engels will use another Diffuse Laser, then mix up Surface Missiles with Marx Smashes. It will then follow up with:

After the Marx Arms are destroyed, Engels will repeat previous mechanics excluding the adds phase and Marx Crush until the fight is over.

This loot is shared by the entire raid.

When originally released, you could receive only one reward item per week for completing duties in The Copied Factory. This restriction was removed in Patch 5.2

Upon completing the Copied Factory, players can also earn a separate reward: a Manufactured Coin. The Manufactured Coin can be exchanged with Fathard in Eulmore (X:10.2 Y:11.7) for items used to enhance Deepshadow equipment purchased with Sack of Nuts, or gear bought with Allagan Tomestones of Allegory or Revelation. 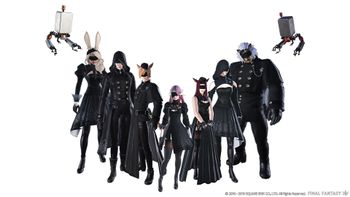 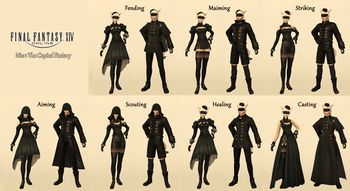 Do Not Sell My Personal Information
Retrieved from "https://ffxiv.consolegameswiki.com/mediawiki/index.php?title=The_Copied_Factory&oldid=304805"
Categories: