Having passed the seemingly endless trials imposed upon you by the Company of Heroes, you have been entrusted with the knowledge of a secret way into the Navel, the domain of the primal Titan. Courtesy of Y'shtola's magicks, the beastman aetheryte is now primed to send you to a confrontation with the Lord of Crags. Gird your loins for a struggle of titanic proportions.

The Navel is a level 34 trial introduced in patch 2.0.

The fight is a rather straightforward fight. He periodically stomps causing damage to the entire party, but he sticks to melee attacks on his primary target until 75%.

At 75% Titan will jump in the air and leave the battlefield, only to return a few seconds later doing massive AoE damage and destroying the walls around the platform. The red circle will take up the entire battle field, and it seems the damage can be avoided by jumping at the correct time. Titan will then gain the ability to send out a large shockwave in a line that will knock players off the platform to their death. There is plenty of time to dodge this attack and it should always be avoided.

At around 50% titan will leap into the air once again and come back down dealing damage. Shortly thereafter, Titan's heart will be exposed and Titan himself will no longer be attackable. Titan's heart needs to be killed as fast as possible to prevent him from instantly killing the party. At this point he also gains the ability to encase a party member in a rock tomb similar to the bubble mechanic from Hellbender in Brayflox's Longstop, though the tomb will not allow the CC'd person to cast spells unlike the bubble, so it's best to clear this quickly.

Once the heart has been destroyed, Titan gains one final ability on top of all his previous ones to call down rocks from the ceiling. Aside from the one new ability, Titan is easily killed after his heart has been destroyed. Avoiding the falling rocks, dodging his shockwave, and quickly freeing other party members are the keys to staying alive and defeating him. 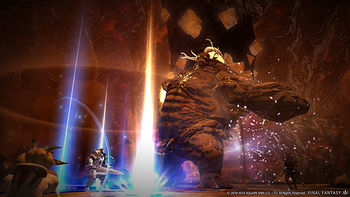 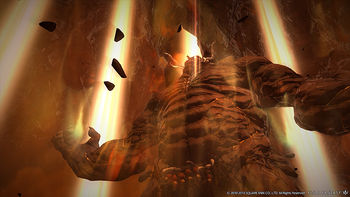 Do Not Sell My Personal Information
Retrieved from "https://ffxiv.consolegameswiki.com/mediawiki/index.php?title=The_Navel&oldid=325850"
Category: