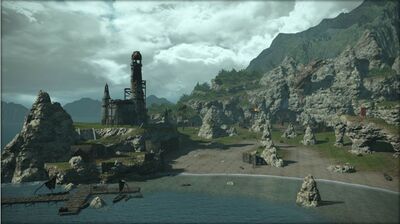 Legend has it that Llymlaen sealed a giant serpent She Herself created within Swallowtail Roam, an island said to drift about the sea so that those with evil intentions might never find it. When Seal Rock was first discovered, many believed it to be the selfsame island-but its true nature remained unknown until the Calamity laid her secrets bare. Upon their return to the island following the fall of Dalamud, Allied forces discovered Allagan tomeliths containing a wealth of knowledge. They concluded that the entire island was in fact an Allagan construct-a proving ground for Omega and other technology they developed to combat the Primal threat. As was the case in Carteneau, control of the island and its resources remain disputed, and peaceful negotiations have failed to achieve a resolution. And so, once more, they would settle the matter on the battlefield.

Seal Rock (Seize) is a 24-V-24-V-24 Frontline battle added in Patch 3.0 where players must claim a set amount of ancient data from Allagan Tomeliths scattered about the arena.

Teams must accumulate a set amount of Data within the time limit in order to win, and the remaining alliances will be ranked according to how much data they've collected. Data is accumulated in one of two ways:

In the event that none of the teams accumulates the required amount of data within the time limit, victory is awarded to the team with the most data.

All over Seal Rock, players will find large structures known as Allagan Tomeliths. By standing within proximity of the Tomeliths, players will be able to extract the data within, increasing their data accumulation.

Tomeliths will be either "occupied" or "unoccupied", based on whether an alliance has claimed it. If a tomelith is occupied and opposing players attempt to access it, the tomelith will become "unoccupied" and the other teams will be able to attempt to claim it.

Tomeliths will activate at one of three ranks: B, A and S. Based on what rank the tomelith spawns, it will hold a larger amount of data for players to collect, as well as offer a larger quantity of data while it's occupied.

As time passes, higher rank tomeliths will spawn more frequently and will be easier to activate.

At the end of the match, players are given

Wolf Marks and Allagan Tomestones based on how their team fared.