Kurrea is a Rank A Elite Mark found in Mor Dhona. 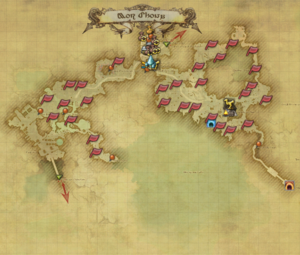 A particularly savage specimen of the unnatural creatures that inhabit both water and land, Kurrea was once a mere nuisance known for purloining game brought down by hunters.
Amphibious beasts having an ingrained tendency to have ideas above their station, Kurrea soon took to attacking and feeding on the hunters. The flaccid, nerveless quality of their skin makes them proof against all but the most powerful thrusts of the blade.

Do Not Sell My Personal Information
Retrieved from "https://ffxiv.consolegameswiki.com/mediawiki/index.php?title=Kurrea&oldid=332116"
Categories: