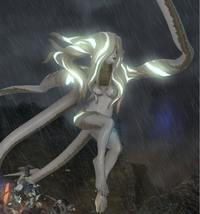 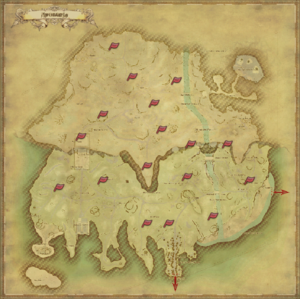 Ah yes, the Forgiven Pedantry. That one's a notoriously vicious eater. In life, he was a fusspot of a mage. Fond of his own voice and making fools of those he saw as his lessers, he boasted that he would find a way to reverse the chaos wrought by the Flood of Light. You can imagine how that worked out for him in the end. One day he up and vanished, and a short while after, an eater wearing his face appeared. For all his faults, his loss was felt keenly. He helped many with his magicks─powerful spells that utilized yarn he spun himself as catalysts. But I don't suppose eaters have much call for spinning yarn, do they...

Ah, the Purified Pedantry. This is a notoriously malicious sinner. In his earlier life he was a pedantic magician. He was in love with his own voice and enjoyed making fun of those he disparaged. And he boasted about finding a way to clean up the chaos created by the flood of light. You can certainly imagine how that ended for him. One day he just disappeared, and a moment later a sinner appeared with his face. Despite all his failures, his loss was painful. He helped many with his magic - powerful spells that used yarn as a catalyst that he spun himself. But I do not think sinsmiths have a propensity to spin yarn, or ...?

Pardoned forceps is a wandering purrrgator by way of a violent temper. If we could tell the legend, before turning into a purgator, he was a magician. This mage would have had the habit of showing off his wits and making fun of those he thought were less in keeping with him than he was. He often boasted of being able to prevent the flood of Light. It can be said that he has been unsuccessfully stranded. For some time now, a purgator whose features remind us of those of this famous magician trembles on this island, whence he comes from. Incidentally, this mage was proud to be able to change the fate of others through the seam ... Not very effective, IMHO.

The "Forgiven Pedantry" is a particularly vicious one of the lamenesss of "Late". According to the legend, the true identity seems to be a paranoid mage.
A person who hides the knowledge and makes the other person a fool, It seems that he has been adamant that it can block the "lights of light". The result is a guess, but ... From when, on this island, which is the hometown of the mage, It started to show similar guilt of similar feature. By the way, it seems that it was the magic that the mage was good at spinning threads and affecting the fate of others. If she were guilty, what kind of yarn would she spin?


Do Not Sell My Personal Information
Retrieved from "https://ffxiv.consolegameswiki.com/mediawiki/index.php?title=Forgiven_Pedantry&oldid=309591"
Categories: