The Mudman is a Rank A Elite Mark found in Il Mheg.

This article is about the A-rank in Il Mheg. For the boss in Matoya's Relict, see Mudman. 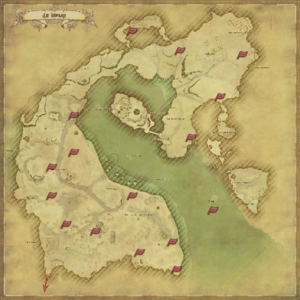 The Mudman will use Feculent Flood in random directions, followed by Royal Flush and Bog Bequest in a random order, followed by Gravity Force which is usually interrupted. See the gallery for pictures.

"So the pixies are no strangers to mischief. Their penchant for transforming lost travelers and trespassers into leafmen is known by all. Well, one day, this particular pixie decides to try and work their fae magicks on a particular leafman to try and make something new, and the result? The mudman, a heretofore unseen abomination, is born. Why mud? No idea. I'm told the victim was originally a portly Mystel woman─not that you could tell by the look of it now. Still, that crimson pixie that frequents the Crystarium has been known to embellish their stories from time to time...