Salt and Light is a Rank S Elite Mark found in The Lochs. 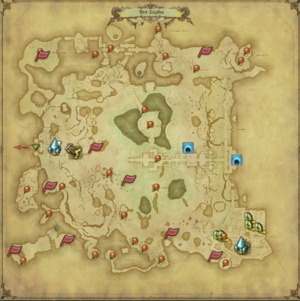 Assuming Salt and Light's random timer is up, it will spawn once 50 items are discarded.[1][2][3]

According to the records of the Resistance, a clan of goblins once came barreling in from the west, and smashed through an imperial checkpoint.
The Empires forces soon gave chase, and cornered the beastmen on the shores of Loch Seld. The goblins were slain to a man, but not before one of them hurled a strange device into the loch's waters.
The surface of the loch was seen to bulge upwards, forming into a watery giant which proceeded to decimate the Garlean soldiers before suddenly draining away once more. Honestly, folks should be more careful with what they choose to throw away...

According to information received from Armago Liberation Army. At one time, the Goblin tribe from the west. He seems to have broken through the inspection of the Imperial Army.
However, following the imperial pursuit of the imperial army, an extinct annihilation near Loch Cell Lake ... At that time, strange equipment was thrown into the lake.
Then, the lake surface rises when Mirumi, When it becomes a giant of water, it says that it disappeared at the end after a row of rampage. Absolutely ... I do not want you to discard everything.


Do Not Sell My Personal Information
Retrieved from "https://ffxiv.consolegameswiki.com/mediawiki/index.php?title=Salt_and_Light&oldid=272770"
Categories: