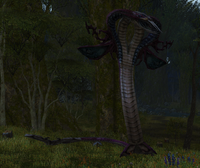 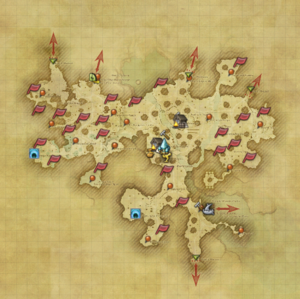 When it rains two times in a row, Laideronnette spawns 2:17 hours Eorzea Time into the second rain, assuming its random timer is up.

42 to 48 hours after it's been killed; or alternatively 25 to 29 hours after maintenance has ended.

Laideronnette, the red serpent of the glade. One of many monstrosities to manifest themselves following the Calamity, Laideronnette's attacks coincide with rainfall, a fact which demonologists deem significant.
Most experts agree that the loathsome serpent is the residuum of Laideronnette the wainwright's red-haired daughter, who was orphaned in the Calamity and fell into grief both bitter and formless, given to shrieking that all the world should weep with her.
Colorful. All you need know is that a giant red serpent has been feeding on man-flesh in the forests. Best to put it out of its misery, don't you think?