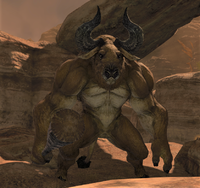 Mahisha is a Rank A Elite Mark found in The Lochs. 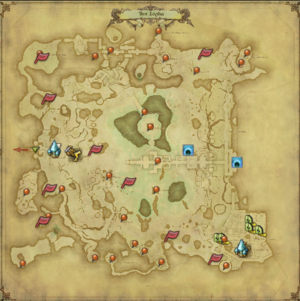 Mahisha is a minotaur who dwells in the Lochs, whose immense size and belligerent temperament is noteworthy even amongst his brutal kin. ...
You might think such a description ordinary for one of our marks, but I confess it was some time before we knew exactly the manner of creature with which we were dealing. Many of the inital sightings were made under the cover of night, you see.
Some believed they were attacked by a lion, others a mammoth, while still others claimed a buffalo as their assailant. It was not until Clan Centurio became involved that we discovered the truth was worse than an amalgamation of all three.

Do Not Sell My Personal Information
Retrieved from "https://ffxiv.consolegameswiki.com/mediawiki/index.php?title=Mahisha&oldid=213898"
Categories: