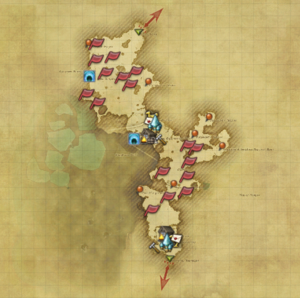 57 to 63 hours after it's been killed; or alternatively 34 to 38 hours after maintenance has ended.

Ah, yes, the sandworm. Large concerns like Amajina & Sons don't give a toss about the commonfolk being ambushed and eaten. But a sandworm attacking their convoy-we can't have that!
...Sightings of Minhocao have long been reported near deposits and mines, particularly those that hold quantities of ceruleum. Alchemically similar to the sandworms' foremilk, the catalyst is a food source for the great worms.
Hunter-scholar: However, any attempt to lure Minhocao to the surface with the use of edible bait would necessitate very large quantities of food.

Do Not Sell My Personal Information
Retrieved from "https://ffxiv.consolegameswiki.com/mediawiki/index.php?title=Minhocao&oldid=213865"
Categories: