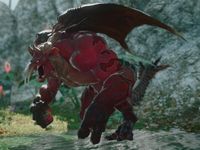 The Garlok is a Rank S Elite Mark found in Eastern La Noscea. 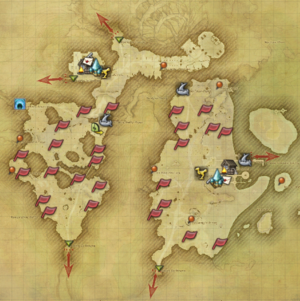 Garlok spawns after 200 minutes of no Rain or Showers, provided its random timer is up. Rain and Showers put Garlok to sleep, ensuring it will not spawn for the next 200 minutes.

42 to 48 hours after it's been killed; or alternatively 21 to 29 hours after maintenance has ended.

A monster long said to dwell in the eternal twilight of a cavern, Garlok was but an idle tale for generations of Bloodshore's children.
However, one child was ill content to be idle, and his name was Gegeruju, the Master of Costa del Sol. At his command, a party entered the cavern in search of Garlok...
Well, you get the idea. They found the beast and woke the damn thing up. Now it's well rested and still a mite annoyed at being roused with torches and arrows.