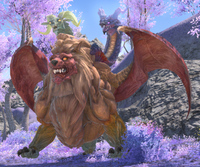 Tyger is a Rank S Elite Mark found in Lakeland. 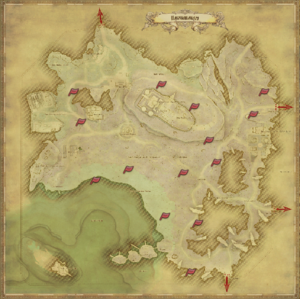 Its three heads have separate mechanics. The Dragon is on the left, the Lion is in the middle and the Ram is on the right. The Scorpion is its tail.

Sightings of this particular mark are first recorded in the days following the Flood of Light. When the doors of the tower that stands at the center of the Crystarium first opened, it is written that the Tyger came barreling forth like a shot from a cannon. But despite its grand entrance, it behaved little different than any other wild beast, devouring livestock and attacking hapless travelers. It rather likes meat, though it has a clear preference for poultry by all accounts. I can't say I entirely trust the accounts of its origin, but given its unusual appearance, I would be not at all surprised if it was indeed a creature come from another world.

The first records of sightings of this notorious monster come from the days after the flood of light. When the gates of the tower, which is in the center of Crystarium, opened for the first time, Tyger is said to have shot at them like a gun. But despite his big presence, he behaved little differently than an ordinary wild beast - he ate the cattle and attacked innocent travelers. He has a general preference for meat and seems to prefer poultry in particular. I can not say that I believe the accounts of his origins. But given its unusual appearance, I would not be surprised if it was indeed a creature from another world.

The first reports of Tygre came just after the flood of Light. The earliest evidence of his appearance dates from when the doors of the Crystal Tower were opened for the first time. Since this event, cattle have been attacked several times in Grand-Lac, and the monster even seems to prefer poultry. The damage is priceless ... It seems that we have never seen a beast like that, many people even think that it would come from another world.

It is said that the odd monster "Tiger" has come to be witnessed after the "light of light" has happened. A huge tower towering over the crystallia ... The story of the fact that it appeared from inside the tower when the door of the Crystal Tower opened, is the oldest witness testimony of "Tiger". Since then, Lakeland has been hit by livestock many times. In particular, they prefer poultry meat, and the total damage is immeasurable. Even so, I have never seen such a monster. It looks like you came from somewhere else.

Do Not Sell My Personal Information
Retrieved from "https://ffxiv.consolegameswiki.com/mediawiki/index.php?title=Tyger&oldid=272766"
Categories: