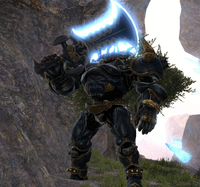 Agrippa the Mighty is a Rank S Elite Mark found in Mor Dhona. 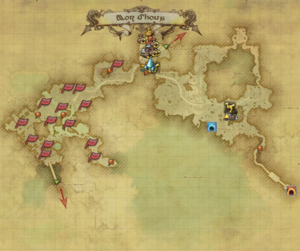 Assuming its random timer is up, opening a Treasure Coffer from a Treasure Map in Mor Dhona has a chance of spawning Agrippa The Mighty.

This magitek colossus is the newest of its kind and appears to have been designed as an anti-adventurer countermeasure.
While the name is believed to be a tribute to an actual Garlean, no record of a likely honoree has been found.
Ye'll want to be on yer toes in Mor Dhona. There was an adventurer huntin' for treasures an' the colossus mauled her somethin' fierce. Hard to kill a woman, though, hah! We die hard, ye know!