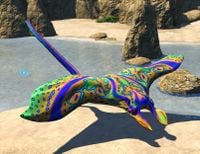 Okina is a Rank S Elite Mark found in The Ruby Sea. 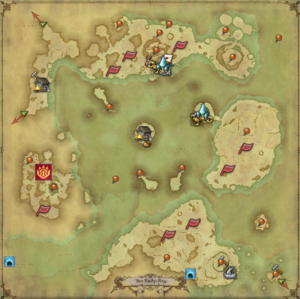 30 Allagan Tomestones of Astronomy and 1

Expulsion - Circular AOE centered on the boss, move away from the boss to avoid this.

Electric Whorl - Large donut untelegraphed AOE. The safe spot is inside Okina's hitbox, when you see this casting move into okina's hitbox to avoid the damage and debuff it inflicts.

Have you heard tales of Okina, the giant striped ray? Drunken pirates insist that the wavekin devours whales, but this is an embellishment─otherwise known as an outright lie. Okina eats only krill.
The tiny shrimp gather to feed on the husks of shellfish, and when the seas teem with their numbers, that is when Okina appears, riding on the spring tide.
But though the great ray does not prey on whales, its cavernous mouth can swallow careless hunters whole. Be sure not to slip in the ebb and flow of the shallows.

Do you know the huge shimaai, "Okina"? The pirates seem to say that they even eat whales, Of course, that is just an exaggerated lie, and my favorite is krill.
Eat shellfish corps, when krill is full of the sea, It seems to be said that Okina will appear on the storm.
However, although he does not eat whale, he is not an opponent who can be careful.
To prevent Okina, who opened its doors, from being swallowed, Be careful of the tide full of tides.