Alteci is a Rank B Elite Mark found in Coerthas Western Highlands. 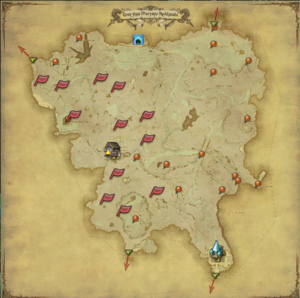 I was born and raised here in the western highlands, so I know firsthand how much the place has changed. As the climate has got colder and colder, creatures that were never native to Coerthas have come down from the mountains to find food
The mylodons are one such species. Time was they made their home up in the far reaches of Abalathia's Spine, but ever since their hunting grounds were lost to the Calamity, they've found their way down here. They're fierce carnivores, who see steel-clad knights as nothing more than a packed lunch.
Alecti's the worst of the lot–a mad myladon who's been laying waste to the local forces. At the last count, more than a dozen noble lives have been lost to that monster.