Lyuba is a Rank A Elite Mark found in Coerthas Western Highlands. 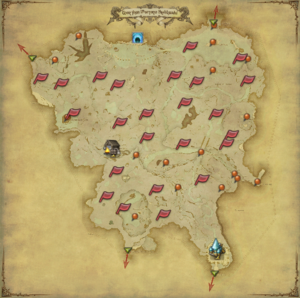 There was once a dragonslayer who was out hunting his prey on the frozen lake of Ashpool, when he made a surprising discovery. An enormous animal was frozen solid underneath the ice.
Thinking that he could use the deceased creature's meat to lure the dragons into a trap, he lit a bonfire over the lake to melt its body free. A most ill-advise plan indeed...
You see, the beast wasn't quite as dead as the knight first thought. Freed from its icy prison, it began to breathe once more, and lashed out at all around it with elemental fury. When the dragonslayer set out to hunt for dragons, I doubt he expected to meet his end at the point of a tusk.