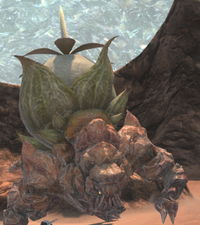 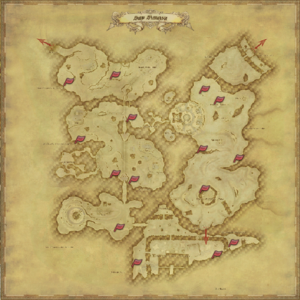 Tarchia spawns with a Sleep debuff. Upon taking damage, Tarchia will wake up and immediately cast an untelegraphed Mighty Spin attack.

Tarchia is a saichaniae that plays host to parasitic vegetation that feeds off its host's aether. Poor bugger, eh? It's awfully difficult to track down, but it is said to be somewhat, er...excitable in the presence of death. I reckon it's anticipating the impending release of aether. Like if someone were to wave a freshly cooked haunch of mole meat under your nose. That said, not all deaths are created equal. The flashier the better, if that makes any sort of sense? Distance is key too, I'd imagine. No point in putting on a show if the host is nowhere nearby. Maybe something explosively loud, too? I don't know, you'll probably think of something if you put your mind to it.

Believe it or not, Tarchia is actually a parasitic plant that feeds on Saichaniae. It is extremely difficult to find, but it is supposed to be, uh ... fascinated by the presence of death. I suspect she awaits the release of aether. As if someone would hold a freshly cooked portion of garbage under his nose. However, not all deaths are equally interesting for her. The brighter the better, if that makes sense to you ... I think the distance also matters. After all, there's no point in taking off a show when there's no one around. Maybe some loud explosions? I do not know either, maybe you can think of something.

Tarchia? He is of the family of the saichaniae, but it is difficult to see compared to his congeners. The poor man was infested with a parasitic fungus. It is even said that he becomes crazy when he feels death coming for someone! It seems that it is because he eats the ether expelled creatures at the time of their death. In any case, if you want to be that who will be remembered as having managed to shoot this monster, I advise you to stage your death and wait for it to happen to take him by surprise. But beware, if you're too far away, he will never see your little carousel ... In my opinion you should cause a big explosion, something extreme! Well, I do not know how, on the other hand, but I'm sure you'll find something, go.

"Tarkia" is a kind of saikania. It is said that this pathetic being made into a nursery of a parasitic plant is weirdly sensitive to the death of other organisms. Apparently, it seems to be because the parasitic plant seeks as a nutrient for the aether that is sprayed when the organism dies. Anyway, if you want to kill this monster and name it, it would be nice to show off and show up the death. However, if you are far away, you may not notice the direction. If you pretend to be dead, it would be good to do it with an explosive sound. I have no idea how to do it.

Do Not Sell My Personal Information
Retrieved from "https://ffxiv.consolegameswiki.com/mediawiki/index.php?title=Tarchia&oldid=242261"
Categories: