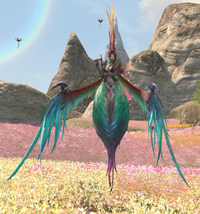 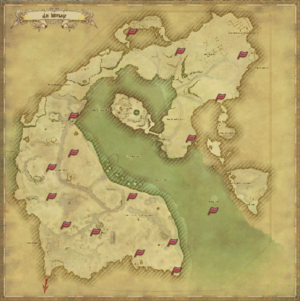 Travel over spawn points with the Scarlet Peacock minion out.

Aglaope's tale is quite old─a popular parable of the Voeburtites. It's about a tiny pixie of surpassing beauty that loved to bask in the midday sun, whose voice was as the tinkling of bells...and another pixie that envied them so. Said pixie wanted nothing more than to transform themselves into the spitting image of the object of their admiration, and so they used their magicks again and again and again to refine their own appearance, until eventually, they had achieved the impossible. If the story ended here I suppose it wouldn't be so bad, but it doesn't. For you see, when the glamoured pixie's “friends” saw what they'd done to themselves, they erupted into uncontrollable laughter. They mocked the pixie terribly, calling them ugly and terrifying beyond belief. Thus was the pixie Aglaope instilled with a terrible hatred and envy for all things small and beautiful, and ever after did they roam the land in search of little wonders to destroy with impunity.