Bone Crawler is a Rank S Elite Mark found in The Peaks. 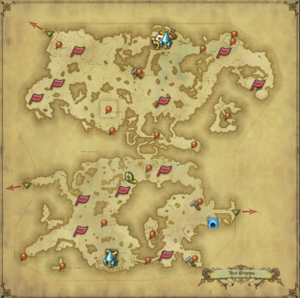 Use the Chocobo Porter in The Peaks. Halfway through the journey Bone Crawler has a chance to spawn assuming its random timer is up.

When trade with the East was its most prosperous, they used to hire mercenary companies to clear the routes o' monstrous predators. Seems the buggers were too good at their job, though, an' managed to wipe out an entire species.
A sort o' huge, fang-mouthed scalekin, it was, an' it's been thought extinct for decades...until one o' them attacked a merchant caravan just the other day.
The bloke what lent the caravan his chocobos tells me that there weren't naught left of his birds--no feathers, no tackle, no skulls. Even since, they've taken to callin' this thing the "Bone Crawler".

Do Not Sell My Personal Information
Retrieved from "https://ffxiv.consolegameswiki.com/mediawiki/index.php?title=Bone_Crawler&oldid=213939"
Categories: