The Scarecrow is a Rank B Elite Mark found in The Churning Mists. 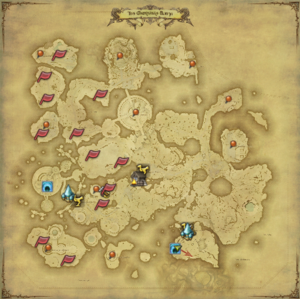 Not long ago, a party of Temple Knights headed into the foothills of Sohm Al to spy on the dragons' activities. However, a few days into their mission, they disappeared without a trace. A rescue party was dispatched to find the knights, and find them they did.
They discovered their missing comrades standing over the body of a vinegaroon–a fearsome scaleskin in thrall to the dragons. But as they approached, the monster suddenly rose to its feet and sprang at the would-be rescuers, slaying several before they could ready themselves.
The Temple Knights were all dead–the Scarecrow had propped up their corpses to lure their rescuers into a trap. After taking its toll on the rescuers party, the monster fled up the slope of Sohm Al, and naught has been seen of it since. We believe it may yet be hiding in the Churning Mists.