Pachamama is a Rank B Elite Mark found in The Rak'tika Greatwood. 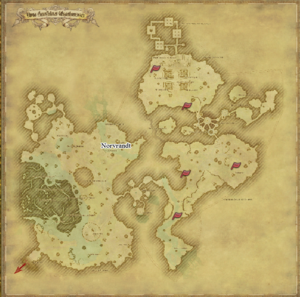 Pachamama is a creature of Ronkan legend. A great serpent, the harvest goddess Yx'Anpa made flesh, which claimed the Greatwood as its home. A regal creature of pure divinity through which the essence of life itself flowed, it was believed that the soil which drank deep of its blood would yield an endless bounty, and so many great warriors of Ronka sought to lay it low. The slayer of Pachamama would be afforded much glory, their deeds celebrated for generations to come. Will you be the one to claim the honor?

Do Not Sell My Personal Information
Retrieved from "https://ffxiv.consolegameswiki.com/mediawiki/index.php?title=Pachamama&oldid=274722"
Categories: