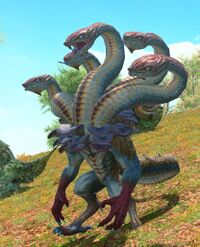 Ophioneus is a Rank S Elite Mark found in Elpis.

Discard a stack of at least five Eggs of Elpis.

Comparative mythology is a field founded upon the close examination of myths of different cultures, with the aim of identifying any common traits they may share. Amongst these commonalities, one in particular has fascinated me─the multi-headed snake or dragon.
Ophioneus is just such a creature─a divine serpent found in several of the oldest legends that remain extant today.
Initially, I believed it to be inspired by the hydra─a draconic creature bred artificially by the Allagans─until I discovered legends that predate even the Allagan Empire!
There is a distinct possibility that a multi-headed serpent─this multi-headed serpent─once lived. Also, it likely ate cloudkin eggs. Write that down.