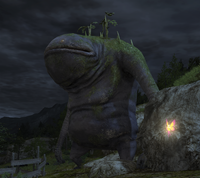 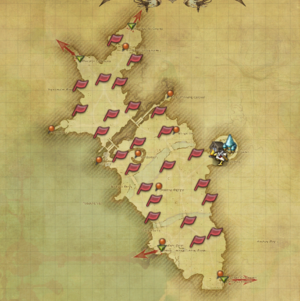 Each Grade 3 La Noscean Topsoil has a chance to spawn Croque-Mitaine, provided its random timer is up.

While gardening has long been a craft rich in obsession and madness, the goobbue Croque-Mitaine has taken the legacy to new extremes...
From the river whose water irrigates the artful plantings upon his head to the pastures rich in worm castings, the creature keeps a jealous eye on the many wild places that supply his cephalic paradise.
Many an unwary orchid hunter, vermicomposter, and moss monger have met their end at the Croque-Mitaine's hands, and its green thumb is well stained with their life's blood.