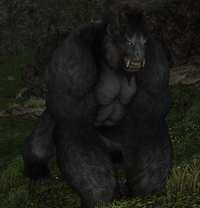 False Gigantopithecus is a Rank B Elite Mark found in The Dravanian Hinterlands. 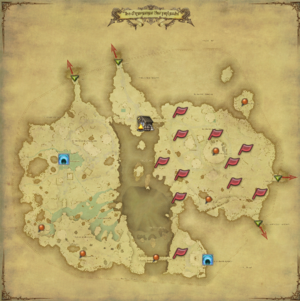 Time and again, the residents of Idyllshire have come under attack from a huge, hairy beastkin─imagine if you crossed a Roegadyn with an opo-opo, and had it row a ten-tonze galley for a twelvemoon.
I scoured the Sharlayan annals for a record of such a monster, and finally found it─it's a gigantopithecus, a fierce beast discovered on the tropical jungles of the Cieldalaes.
It was brought here as a youngling by a Sharlayan scholar, who raised it in a specially constructed glasshouse in some vain attempt to research its ecology. But when the exodus came, the callow whelp didn't think of taking his pet with him. Now it falls to the Clan to pick up the pieces.