Kreutzet is a Rank B Elite Mark found in Coerthas Western Highlands. 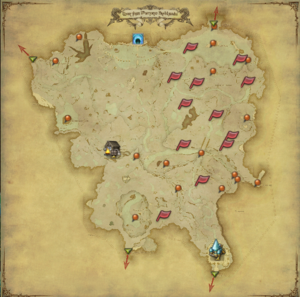 Have you ever came across an aechaeornis? At first sight you might think they were birds, what with the feathers and all, but they're actually a primitive species of scaleskin, closer to raptors than they are to chocobos.
The only thing they definitely share with birds is their brain–that combination of mental weakness and physical strength makes them perfect thralls for the dragons, who use them to launch constant attacks on the Ishgardian forces.
The knights are particularly wary of the one they call Kreutzet. He's got such a strength in those thighs of his, even the thickest snowdrift's not enough to slow him down. He races hither and thither across the snowfields, tearing apart any outpost unlucky enough to stand in his way.