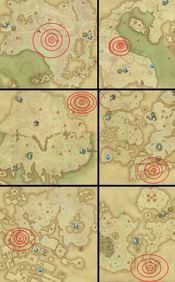 Each time a Rank S dies in Norvrandt, it has a chance to spawn four Forgiven Gossip throughout the zone. Once four of them are killed, Forgiven Rebellion will spawn.

If they spawn, the game will announce: "The minions of an extraordinarily powerful mark are on the hunt for prey."

They will withdraw exactly 5 minutes after this message if not engaged, or if disengaged by dying.

When all four are killed, Forgiven Rebellion will spawn.

When it spawns, the game will announce "You sense the presence of a powerful mark..."

This is a curious mark. According to my sources, they hail from beyond Il Mheg's borders, and may well roam all across Norvrandt. It's a mean bastard, even for a wandering eater. We've received reports of it actively seeking out veteran hunters, as if it craves the thrill of the fight. Which isn't to say that it fights fair. Sadly, several of our top Nutters have been ambushed while returning home from a successful hunt, which has led some to wonder if it commands lesser minions to guide it to promising prey. As for who it was before it turned─some say it was an elven soldier who led others in open revolt against the rulers of Lakeland before the Flood, all at the behest of the mysterious Shadowkeeper, and that like the Virtues, its unusual hunting habits are rooted in its past life...

Do Not Sell My Personal Information
Retrieved from "https://ffxiv.consolegameswiki.com/mediawiki/index.php?title=Forgiven_Rebellion&oldid=269141"
Categories: