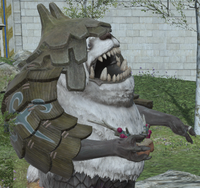 Burfurlur the Canny is a Rank S Elite Mark found in Labyrinthos. 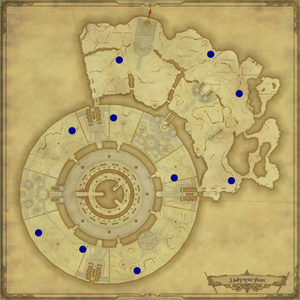 Use a Tiny Troll minion on spawn points during Clear Skies or Fair Skies between 9AM and 6PM Eorzea Time.

The massive trolls you find throughout Labyrinthos have long inhabited the wilder parts of the Northern Empty. They were taken from their natural habitat to act as apex predators in Labyrinthos, and are absolutely essential in maintaining its ecosystem.
The ones that do not attack people, at any rate... Which brings us to Burfurlur, the wizened leader of a veritable horde of his kin. As for his appellation─he's remarkably quick-witted for his kind, and has even managed to craft armor and weaponry from tree bark.
Naturally, Burfurlur has been classified as an essential specimen for ongoing research into the intelligence of trolls as a species, but this is somewhat difficult to accomplish whilst he's still roaming free, taking bites out of researchers.
It will be no simple matter to draw out such a cunning mark without raising suspicion, but observation from afar has shown that he tends to let his guard down at the sight of younglings at play on a pleasant day...

The troll, a giant beast that has lived in the North Pacific Islands for a long time, he was brought in to become a predator at the top of the ecosystem.
In fact, their presence is important to the environment of Labyrinthos. However, when it comes to attacking people, the story is different ....
The head of the flock, called "Burfurlur", is old and wise. I came to the point of making armor-like material from bark and arming it.
So, for the Greeners Guild Ship, in the name of securing the materials necessary for troll intelligence research a subjugation request was issued.
The question is how to lure out the existence of such wisdom. Show off the juveniles playing happily under good weather, how about inviting you to be alert?

It takes everything to make a world, and above all, to ensure the balance of the ecosystem of the Labyrinthos. We wanted predators at the top of the food chain, and we thought we found them by bringing in trolls from the North Sea islands.
Unfortunately, our presence in this chain is ... at a lower rung. The Burfurlur leads the pack, by age and experience. He even made a semblance of bark armor to protect himself, that's to say!
Our researchers would like to test the limits of his intelligence. They therefore appealed to the college of gleaners to find an adventurer up to the task.
Of course, you don't so easily track down such cunning prey. But maybe he would come out of his hiding place if he saw little ones of his kind having fun on a sunny day?

The giant trolls that you can see in the Labyrinthos have inhabited the northern islands for a long time. Considered to be important predators at the top of the food chain, they were brought here.
Believe it or not, they are absolutely essential to creating the ideal ecosystem in the Labyrinthos.
Well, at least those of them who don't attack people ... Which brings me to Burfurlur, the wrinkled chief of a horde of trolls. You wonder where this old beast got its nickname from? Well, he is extremely cunning and has, among other things, managed to make armor and weapons from tree bark.
Burfurlur has meanwhile been classified as an essential specimen for ongoing research into the intelligence of trolls as a species. Therefore, the stealers' guild was asked to subdue the creature.
The only question is, how do you lure out such a cunning target ... Maybe you could just pretend to be carelessly roaming around - like a spoiled child enjoying the beautiful weather?