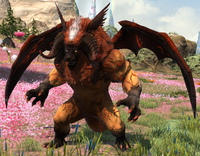 O Poorest Pauldia is a Rank A Elite Mark found in Il Mheg. 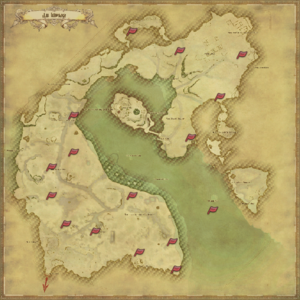 Its attacks are mostly uncasted, so you have to watch its movement to determine which attack it will do. Keeping to its side is safest.

About a year ago it was when a party of scavengers ventured into ruins of old Voebert and discovered a hidden passage that led deep underground to a secret gaol, and in one of its cells found a horrible beast bound in chains. A name had been carved into a sign: Pauldia. The same name as the younger princess. Nearer to the fiend, writ in blood on the walls, was a message... Blinded by my lust for the throne, I heeded a traitor's honeyed words. I was a pawn in his grand design and paid the price. I beg only for the selfsame mercy my sister received...“

Do Not Sell My Personal Information
Retrieved from "https://ffxiv.consolegameswiki.com/mediawiki/index.php?title=O_Poorest_Pauldia&oldid=230407"
Categories: